If you’re interested in visiting Abkhazia, it’s not so difficult, as you can guess. You have to fill out application at the Abkhazian Ministry of Foreign Affairs website and after few days check your email box for an authorization letter. Print it and it’s your permission to cross “the border”. I strongly recommend crossing it from Georgian side. If you will do it from Russian territory and later you will try to continue to Georgia, you can be punished as crossing Georgia’s territory illegally and you’ll have opportunity to discover local prison for two years. You need Ingur border crossing, which is next to Zugdidi city. To reach it, you can by bus, train… or by hitchhiking, as I did with my lovely travel buddy – Edita. Hitchhiking in Georgia is always amazing, so we reached border really happy.

First of all, we visited awesome Georgian officers. They were interested, why we’re going to Abkhazia and gave as some tasty nectarines. After asking me, how many days we will be there, I answered “Four days. If we won’t come back, start search for us“. Stupid joke, because… they can not cross the border. Georgians can not visit Abkhazia (or they must to have a status of IDP- Internationally Displaced Person), but Abkhazians as the citizens of Georgia’s territory (as almost all world believes) can visit Georgia. Doesn’t sound fair… 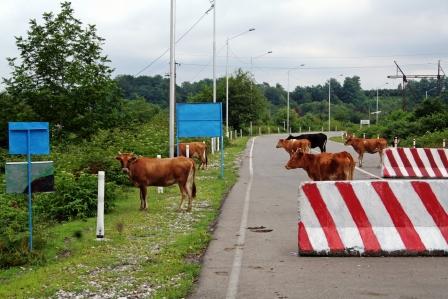 The border is an apocalyptic looking bridge. Cows on the road, taking naps in shadows. Terribly old road, covered by stones and holes. Cars are not crossing the border at all. People can cross the bridge by walking or by using transportation service, called “Volvo” or “Abkhazian Georgian express”. It’s a horse cart. For 100 ruble, horse will take you to Abkhazia. How cool is that! Of course, we tried it. Super uncomfortable and waving, but very unique. People in cart and after in mini-bus to Gali, were very interested in us. Usually, tourists are from Russian side and Russians. Two pre-baltiki coming from Georgia- not a common event. “How long were you in Georgia? How did you like it? What are your expectations in Abkhazia?”  Not very easy questions. We were lying that we have traveled just a little bit in Georgia and everything is normal there. It’s the most neutral adjective you can find. Expectations? “To see how country, that doesn’t exist, survives between Russia and Georgia.” Of course, we didn’t say that. We were telling things like “We heard it’s wonderful nature here”, “We want to visit beaches”…. 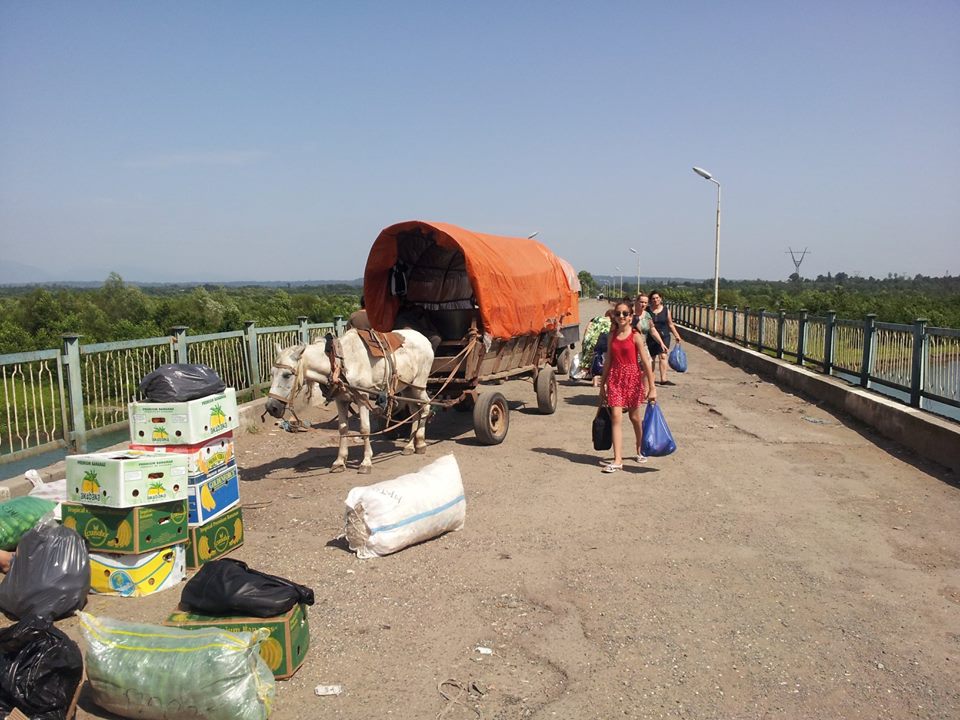 Later we crossed the bridge and visited Abkhazian officers. I was little bit nervous, because my passport is full of Georgian stamps. However, while we were waiting, one officer started to talk and flirt with me. After short procedure and reminder for us to go to Sokhumi and buy a visa (10 dollars), we were officially in Abkhazia. My lovely officer was offering to go for coffee with him, but we escaped, went to Gali and after to the capital- Sokhumi. 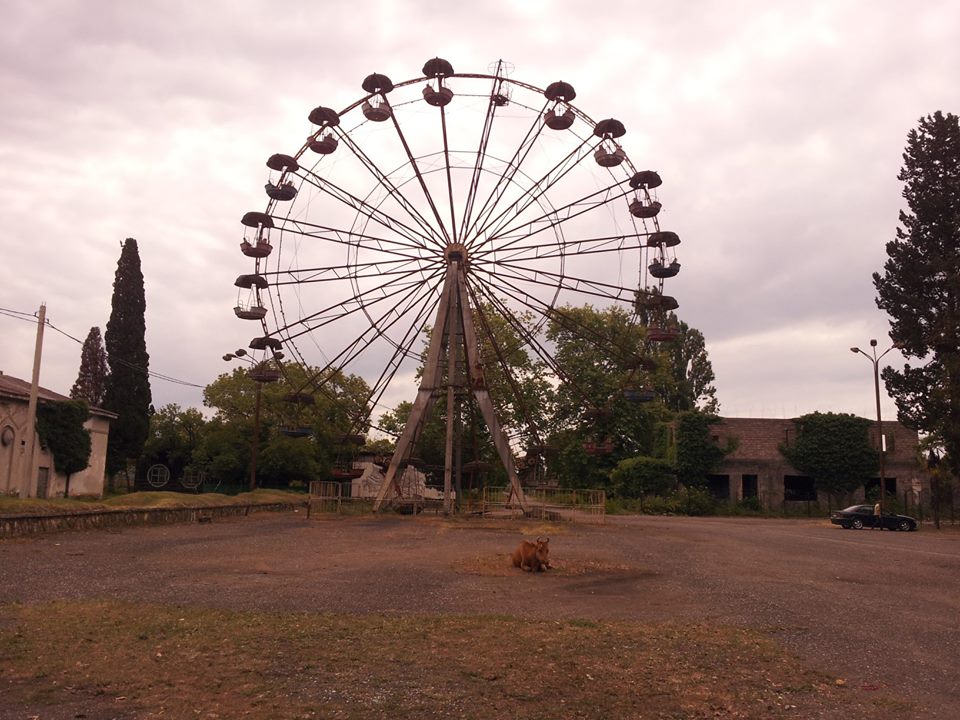 Next to the road to Sokhumi, you can see abandoned buildings and ghost villages. Capital also looks depressing. Wonderful sea and next to it- sanatoriums, which are visited just by ghosts now. Back to the soviet time, it was a popular place, but now you can see, how time can destroy colors of walls, windows, yards…spirit. Just the images of postcards and movies, we have seen in our childhood, helped us imagine, how it was before. Nice beaches with many old, unused, broken constructions and graffitis like “Lenin + Stalin = Revolution” . 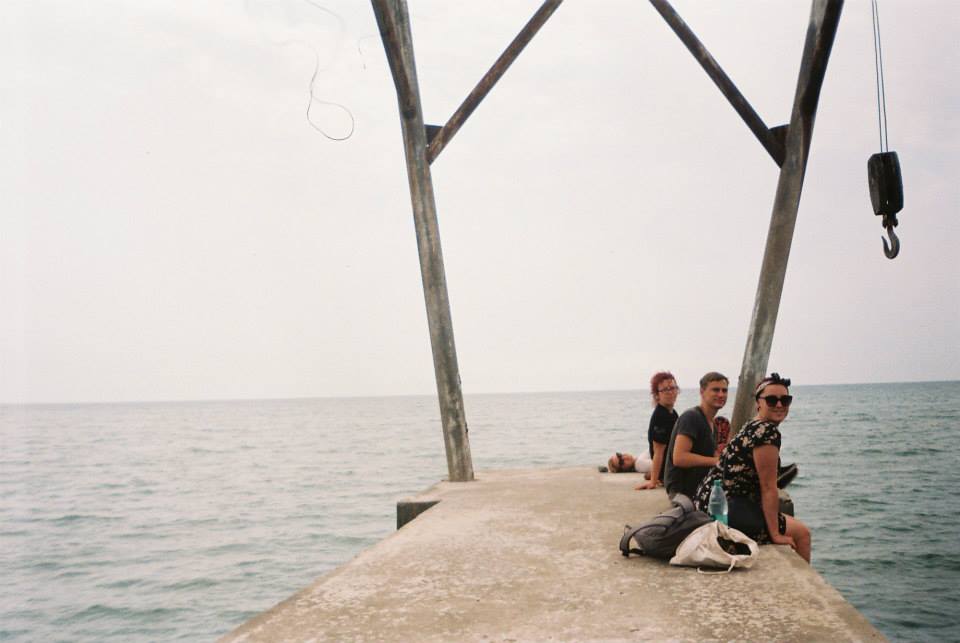 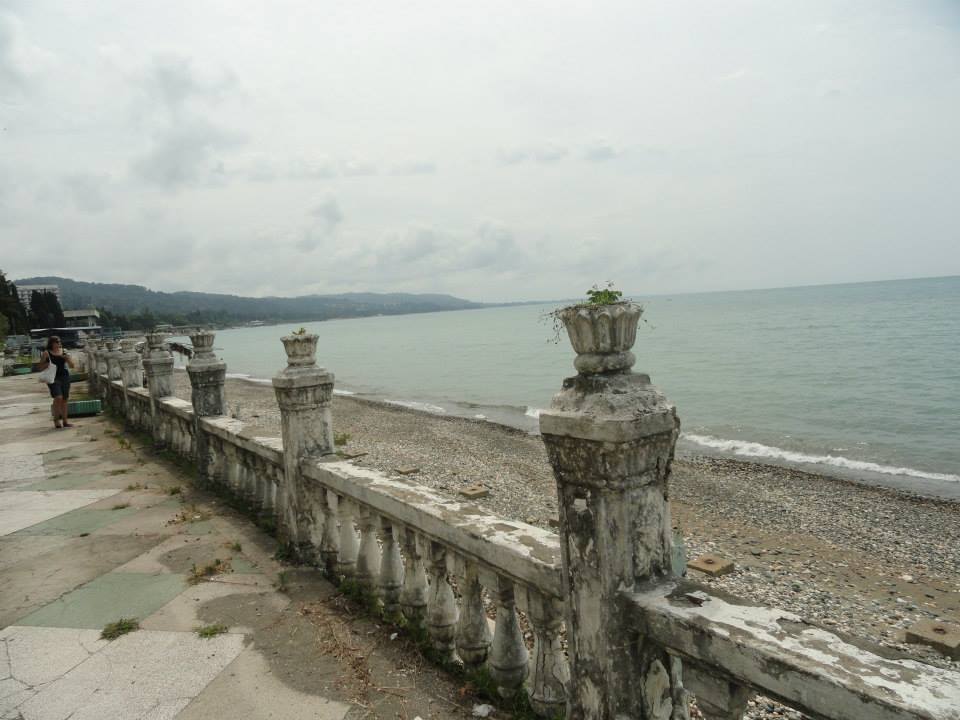 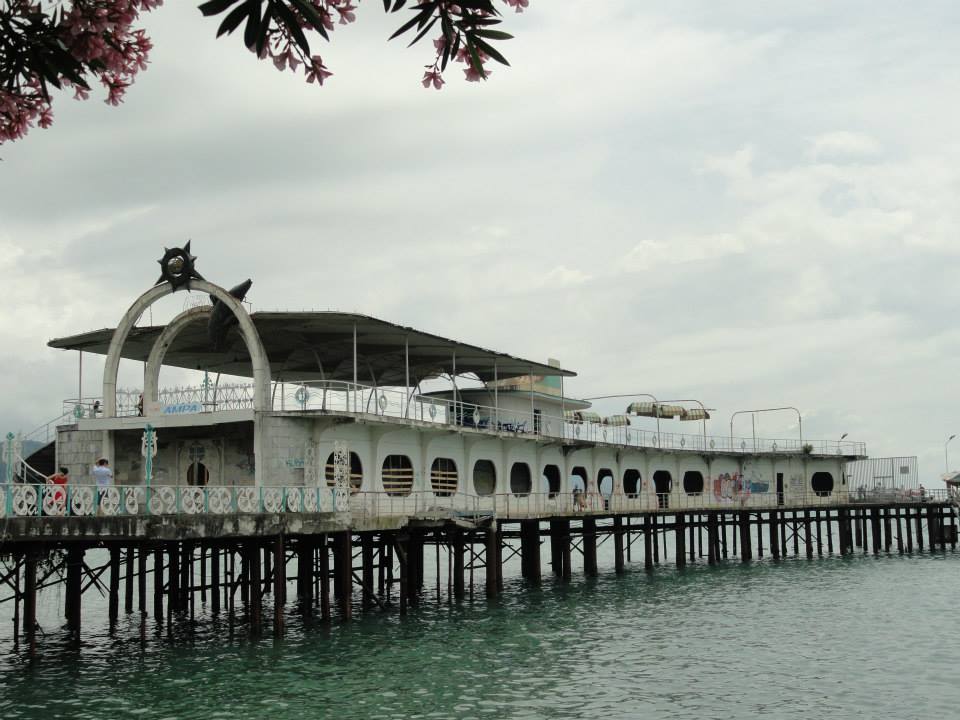 Without any competition, the best “monument” of Sokhumi is parliament, which was bombed during the war. Huge, destroyed building in the middle of the city. Why they are still keeping it? Maybe to remind that fight is still not over. It’s possible to climb on the rooftop (enter right wing’s building, find stairs, go up to last floor, cross the long corridor without walls, find stairs and climb on the rooftop, cross a narrow crossing to the main building, climb through the window and find stairs and continue until the rooftop). Feels creepy, but also somehow special to walk through all destroyed floors and finally, to be on the rooftop with lonely Abkhazia’s flag and view of Sokhumi. 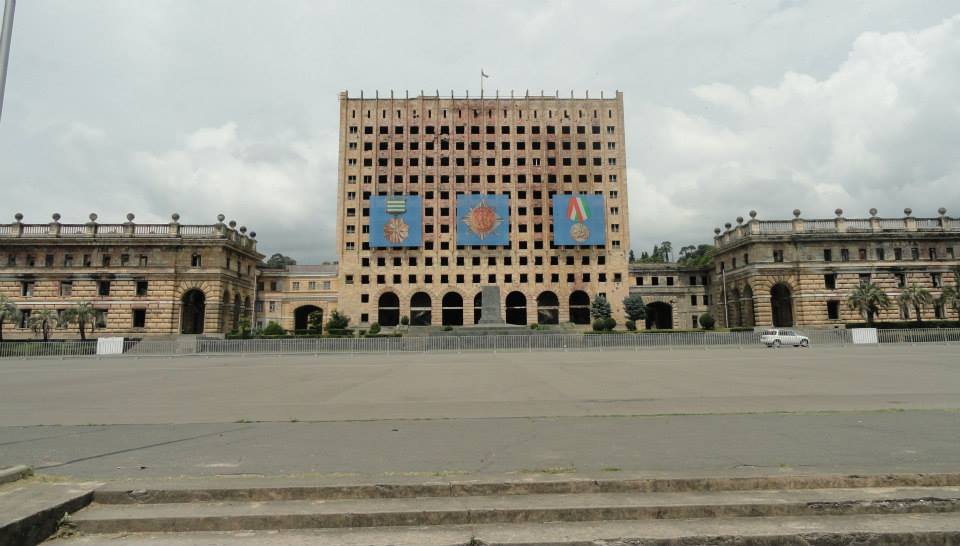 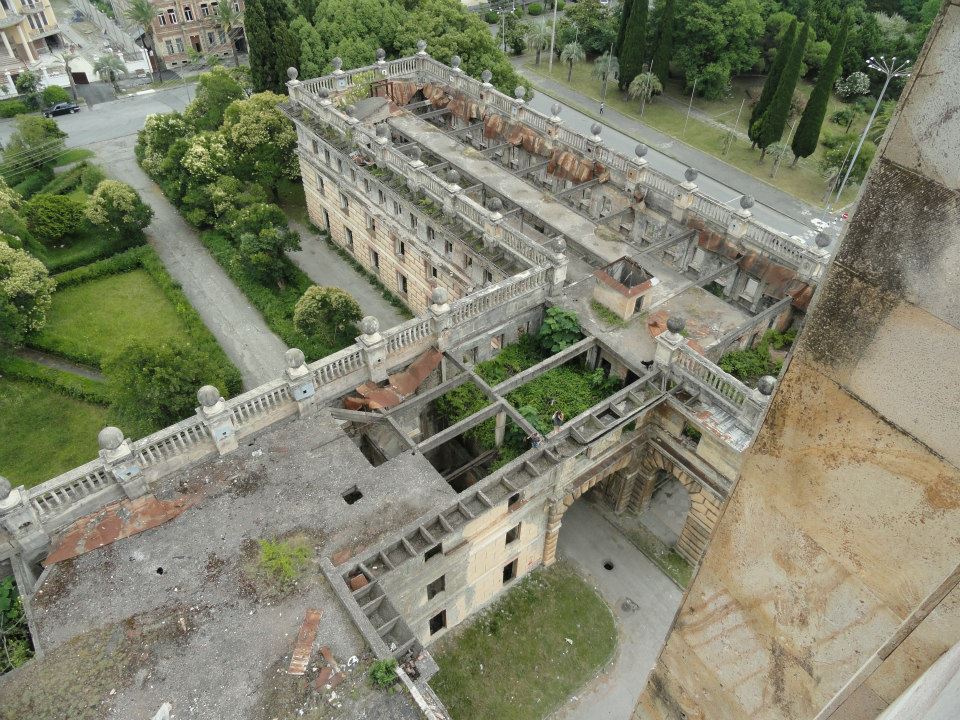 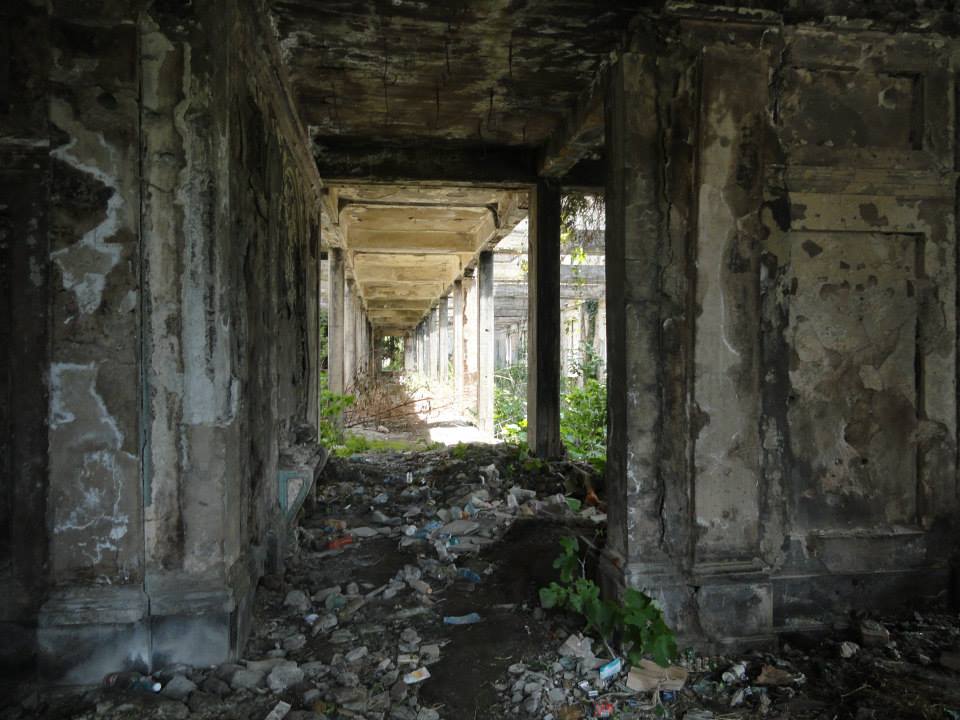 Also I had opportunity to visit Gagra. A city, just one hour ride from Russian border. I think it’s the most beautiful beach I’ve seen in Georgia. Crystal blue sea next to the small town on the green hills. If not a loud Russian pop music, it would be really idyllic. Gagra was the main holiday destination for Georgians until they lost it. Just after war, Batumi became so popular. 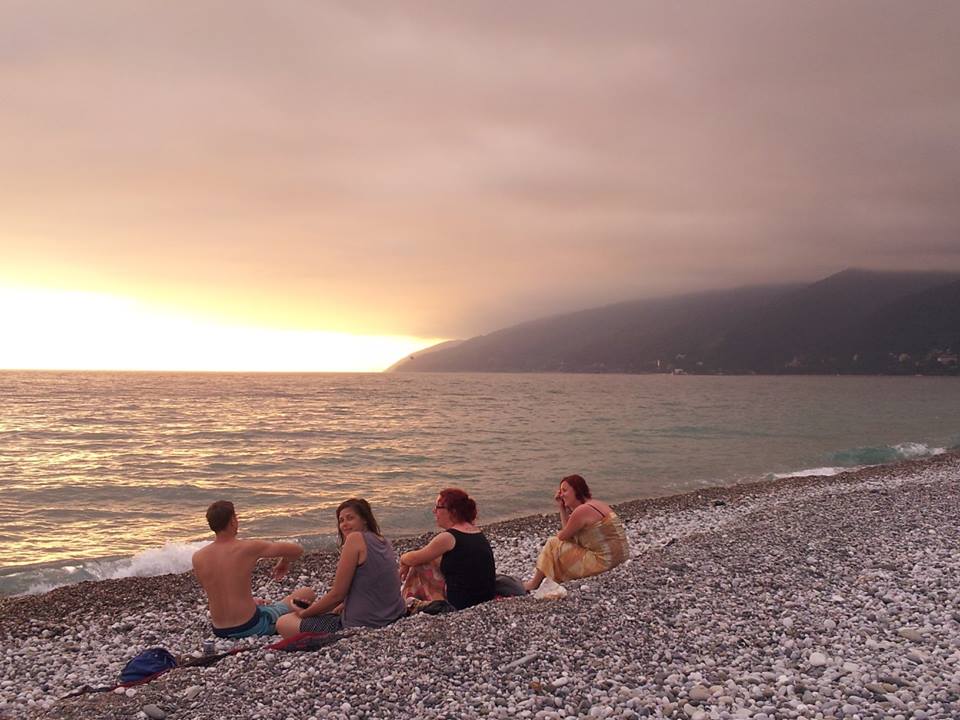 Of course, we tried to hitchhike in Abkhazia. With a company, everything was really great. The driver until the Novi Afion even invited as for lunch and told us many things about Abkhazia. But when I was hitchhiking alone from Gagra to Sokhumi… Let’s say, almost year passed since the last time I was sexually assaulted.  And here 3 from 4 cars were doing that really openly. It’s a shitty feeling to ask driver to stop and let you out of car. I know how to act, so I don’t get stressed so much. Just it’s hard to get positive mood back. 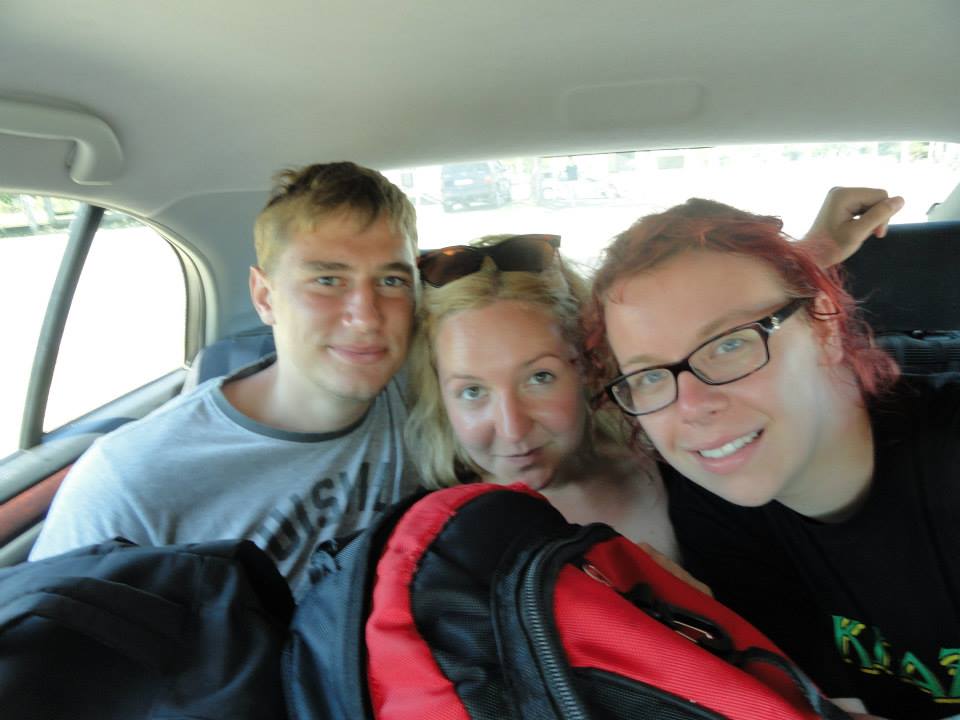 From talking with Abkhazians, I started to feel that …they made a mistake more than 20 years ago. And they know it, but they can not admit it, because their relatives were fighting and dying to achieve independence. But now, country’s economy is weak, just Russian tourists and investments keeps country in surviving level. It’s hard to be independent, then foreign investments are not coming, because…it’s not a country. Still, they don’t want to give up and join Mother Russia. To join back Georgia? For me sounds impossible. In every small town, they have monuments for heroes of the war. They can’t be a part of Georgia, because of the war. Brothers were killing brothers. You can’t deleted that from history easily.

I guess, country looks same as it was twenty years ago, just no one was taking care of it, because were too busy to be independent.  Almost no new constructions, full of destroyed or abandoned buildings. However, it’s a beautiful land and people have a right to live happy life. But governments are playing their own games and people are just marionettes. Sad true. Now Abkhazia is a land of ghosts and sunshine. Beautiful landscapes and abandoned buildings. If you are bored of tourist destinations, you won’t be disappointed by visiting Abkhazia. 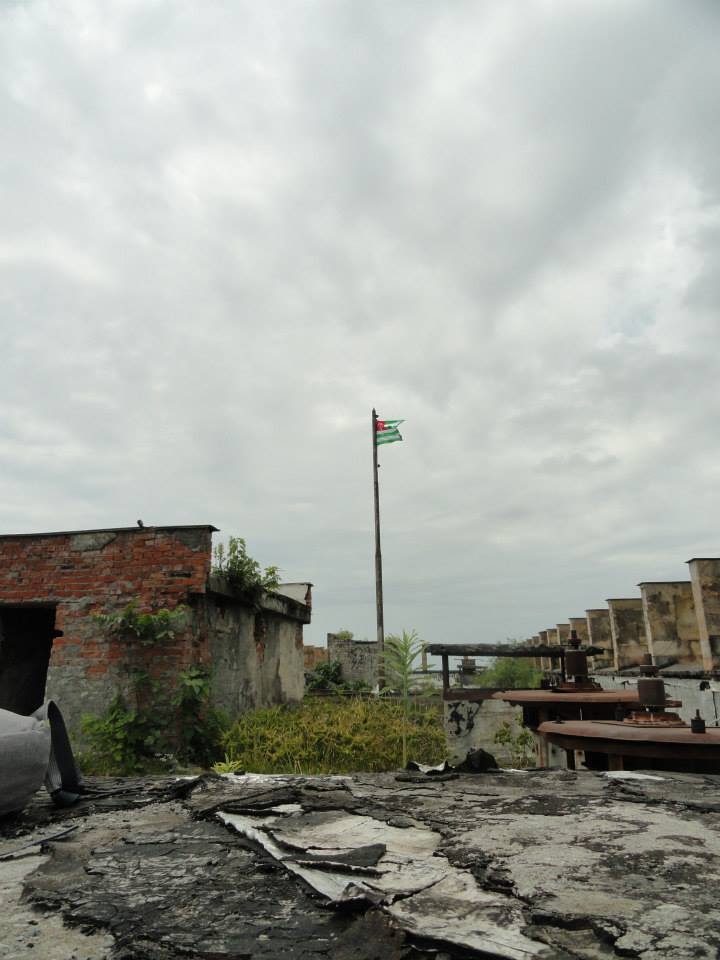 Back to the border … This time, I am alone. Abkhazian officers were interested if I lost my friend. I ensured them, she will come after day or two. Crossing the bridge back to the part of the world which is officially recognized. Felt so good, because I had very tiring and not very happy hitchhiking experiences.

“Why did you come back so fast?”

“Where is your friend?”

“Don’t worry, I am joking, she will come back,  but not today”

I was sitting in their office, while they were checking passports. Drinking Borjomi, telling about Abkhazia, how it looks now and feeling happy to be back to Georgia. Because, maybe 20 years ago, Abkhazia was a part of Georgian state… But now, after all wars, conflicts, Russian influence and the development they missed- it doesn’t feel like Georgia anymore … It’s Abkhazia, the country that doesn’t exist.