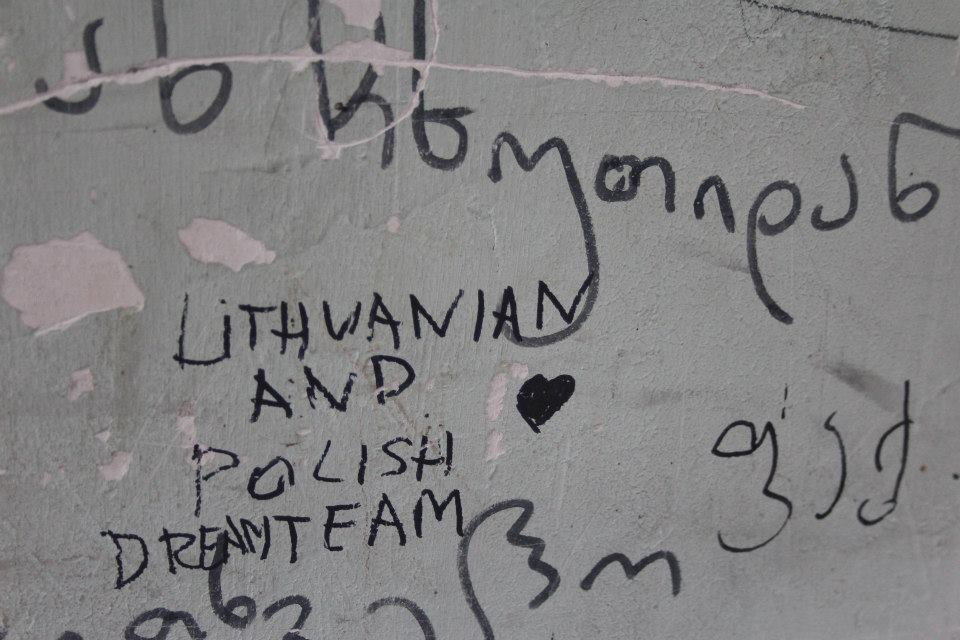 Studying in Georgia was really wonderful experience, because of people around me. My „Eastern European family“- group of young, wild and unique students. Each of us had very different personality, but we managed to tolerate differences and felt like family. It was so special. Together we were Living, Laughing, Partying, Complaining… and of course, Travelling.

Honestly, I was not so much into exploring Georgia every weekend. It was my third time in this Caucasus country.  Once you have seen monastery, you know, all of them will be almost same. Once you have visited Capadocia in Turkey, none of other cave town will be comparable to it. So, if I was travelling around, I was doing that, because of the process, but not destinations. Hitchhiking and good company- it is a guaranty for a good trip.

For example, I will tell little bit about the trip with my Polish sisters and other Lithuanians in South Georgia. I like lists, so…

10 reasons, why travelling with „The Dream Team“ is awesome.

1. First of all, hitchhiking became a game. For accomplishing tasks was possible to get „points“. For example, team was able to get points if  they get drinks, food from drivers. Bonus points, if team shares these presents with other team. Points for reaching destination first or for convincing driver to give a ride for another team. Same as, for getting driver’s number, but… not giving yours. If you will fail and give your number, you will get „minus points“. These kind of tasks made hitchhiking really exiting.

2. With „The Dream Team“ you can make fun of anything. In Borjomi we found  the guy, who works in tourist office. His name is Arthur. Totally not Georgian name. This guy was very helpful, but… I don‘t know exactly why, but… we created a joke. „Arthur, Arthur… why sun is shining? „Arthur, Arthur, when rain will stop?“. We were joking like this just between us, so none, who was not with us during the trip, can understand why it‘s so funny. And it‘s really impossible explain. That guy was the only Arthur I met in Georgia. I remember, when we were leaving his office, he asked us to give feedback and answer some questions on small paper sheet. One question was if we have any complains about the Tourist Office. Arthur even proposed to write complain that in Borjomi tourist office works a guy with not Georgian name, so he doesn’t represent Georgia correctly.  Maybe I was really making too much fun of him… 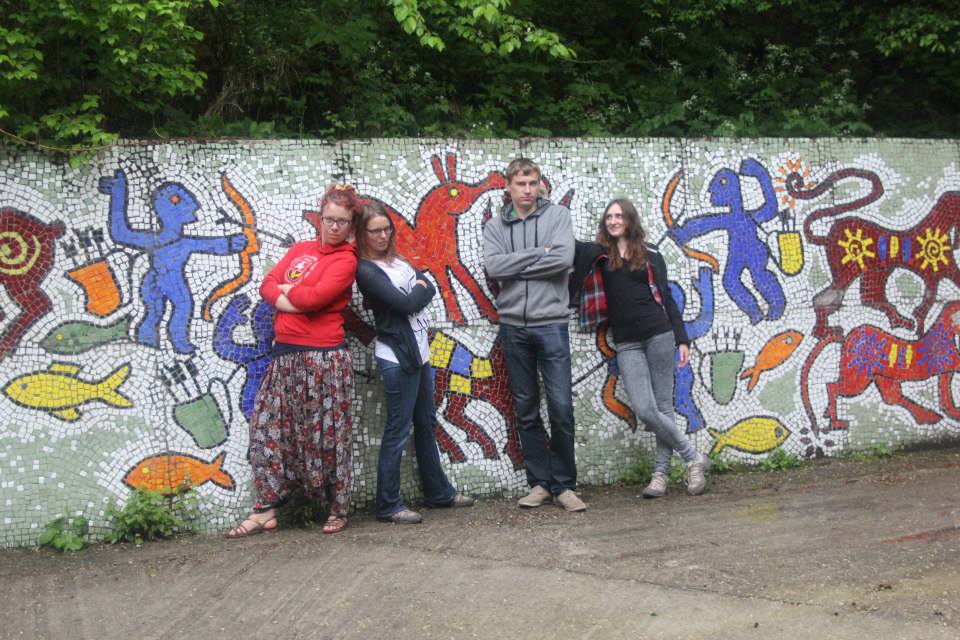 3. We know how to find cool places. If you will be in Borjomi and you will search for some non touristic place to eat go to …the “cafe tourist”. I know, sounds not very local, but it’s really cool place with strange chef.  That men was very friendly, sitting next to us while we were ordering and dancing for us during the dinner. Cool guy. 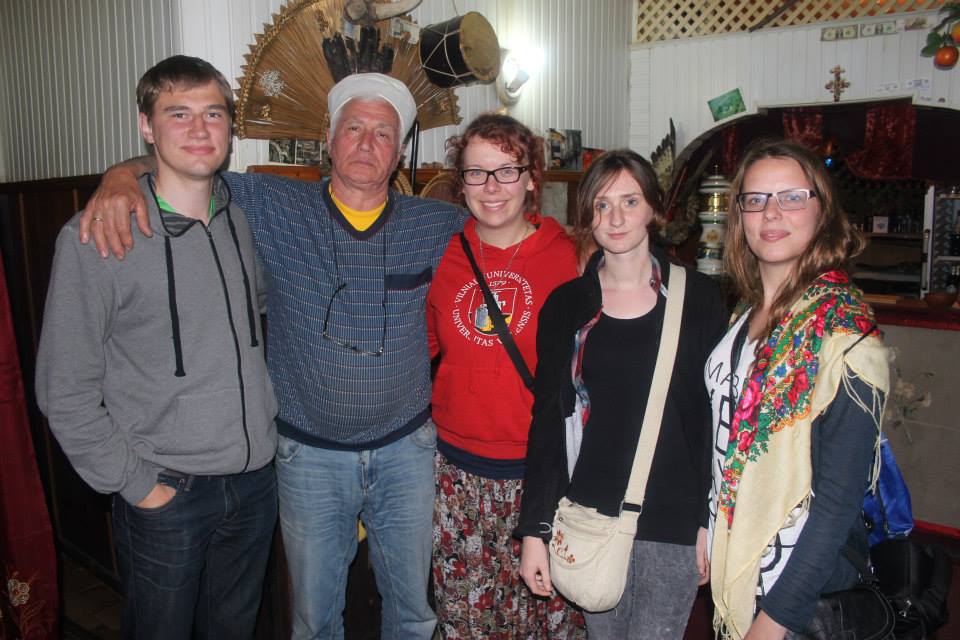 4. While travelling, I was not feeling pressure to do everything with a group. If I wanted to do something else- it‘s not a problem. I didn’t want to go to Borjomi swimming pool, but I really wished to have a short trip to… Turkey and to eat some çiğ köfte. It‘s one of my favorite meal in world! Turkey was just 80 kilometers away. I convinced my blonde travel mate, to go to Turkey. I promised her that we will find a big market (Bazar), so we can do summer shopping. We left others in Borjomi and  easily hitchhiked to the nearest turkish city… but  already in the car we found out  that there is no market today. But I still was dreaming about çiğ köfte… However,  in that small Turkish city  with beautiful landscape, were just few restaurants. We found just pilav, kebab, tavuk corba  and that‘s all. After two hours in Turkey, we came back to border. Officers were surprised that we came back so fast. While talking with them, I noticed that they have some  çiğ köfte!

So, my mission to taste çiğ köfte was accomplished and we came back to Akhaltsikhe were our friends were already waiting us. 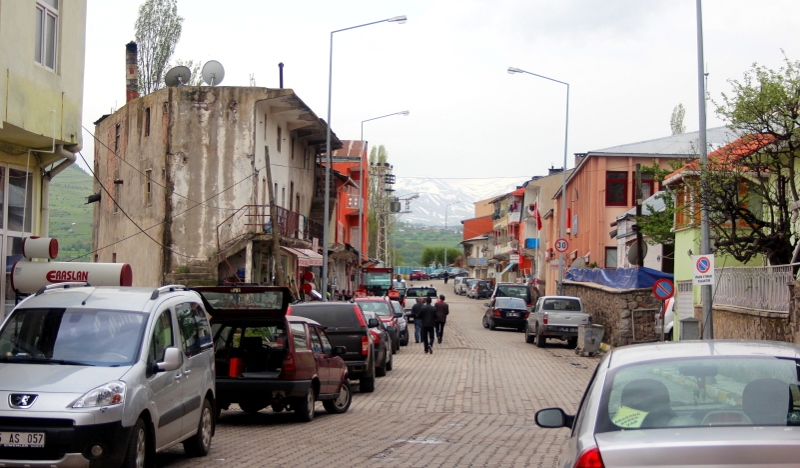 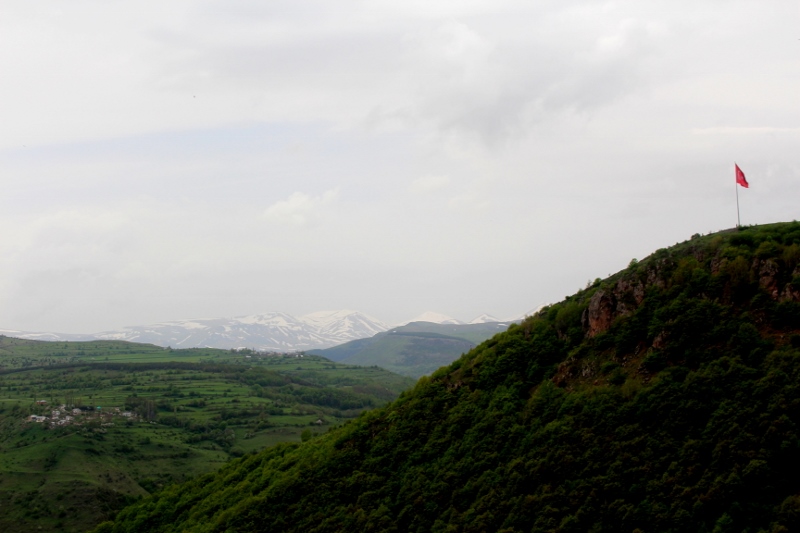 5. I appreciate how patient was  „The Dream Team“ , because they had many reasons to kill me, but they were kind enough, not to do it.  You know, sometimes I have very creepy sense of humor.

After we reached Akhaltsikhe and met others,  we all went to Abastumani. They again wanted to swim in some mineral springs. I am not big fan of that, neither my polish sister with metal heart (sounds scary…). While others were swimming, we were drinking in local bar… and then rain started. Story short, swimmers  didn’t want to wait for mini bus, so hitchhiked back to our guest house in Akhaltsikhe. While me and polish sister stayed in that stupid village in the rain. Maybe it was  misunderstanding of that happened, but somehow we decided to make revenge. We texted them, that we got stuck in that city and were are no mini bus. No cars going back. It‘s cold, raining and  getting dark. Also we got offer to stay with some men at his house. Of course, all these messages were reaching them one by one  to keep them believing. They were freaking out.  They already wanted to come by taxi and take us, after we texted them, that our host started to act strange and pushy… While they were scared, we were drinking beer 20 minutes by walk away from our guest house. Of course, we managed to stop a car and come back. But we wanted to make this cruel and stupid joke. Finally, we decided to leave bar, come back to guest house  and tell the truth. However, after leaving bar, in the street in front, we met other Lithuanians. First, they were happy that we are safe, but after a minute, they wanted to kill us. True, they had a right to do it. 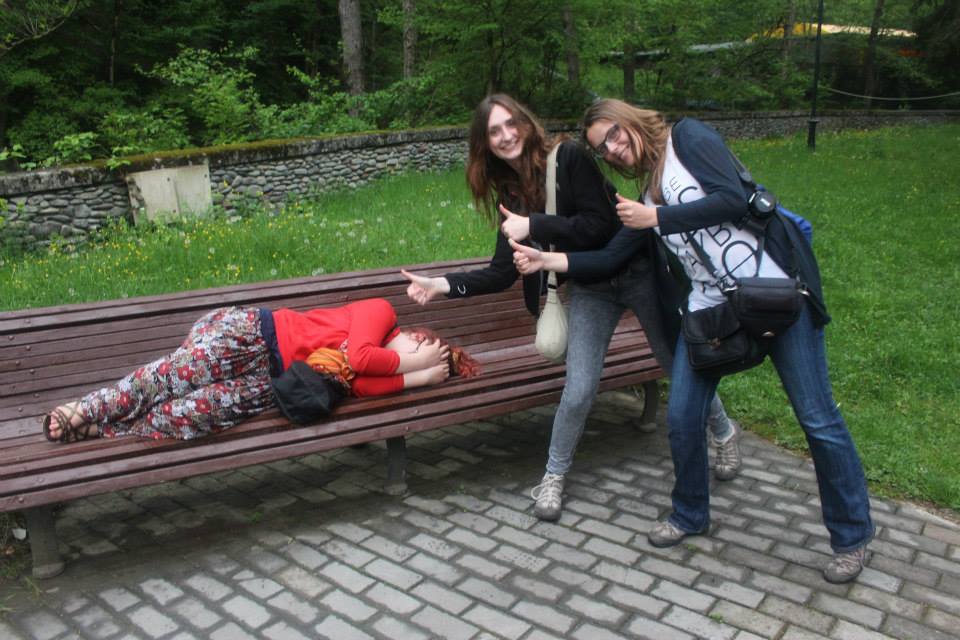 6. „The Dream Team“ was promoting healthy way of life. Kinda… In very strange way. We gave up the fight against alcoholism, but some of us were trying to quit smoking. That‘s how was created „ The Slap Club“. I was enough stupid (or drunk, or having moral hangovers) to join this club, even I knew, I am the heavier smoker from group. In the club were three members. Each of us had a right to slap another member if she/he smoked. You can slap in any place and as stronge as you want. It‘s possible to leave club, but the punishment- 25 slaps from each member. As I remember, I left club after two days, because one of the member, who happened to be sadist Lithuanian guy, was enjoying slapping me too much and it was really painful. After sometime slaps became like „money“ for doing some tasks „ I will go and buy chacha, if you will take out 5 slaps from my list“. Finally, slap club dissolved and members were smoking again. We tried to create another punishment club as for one cigarette to do 20 sit ups or 35 push ups… The problem, I was not able to walk next day… 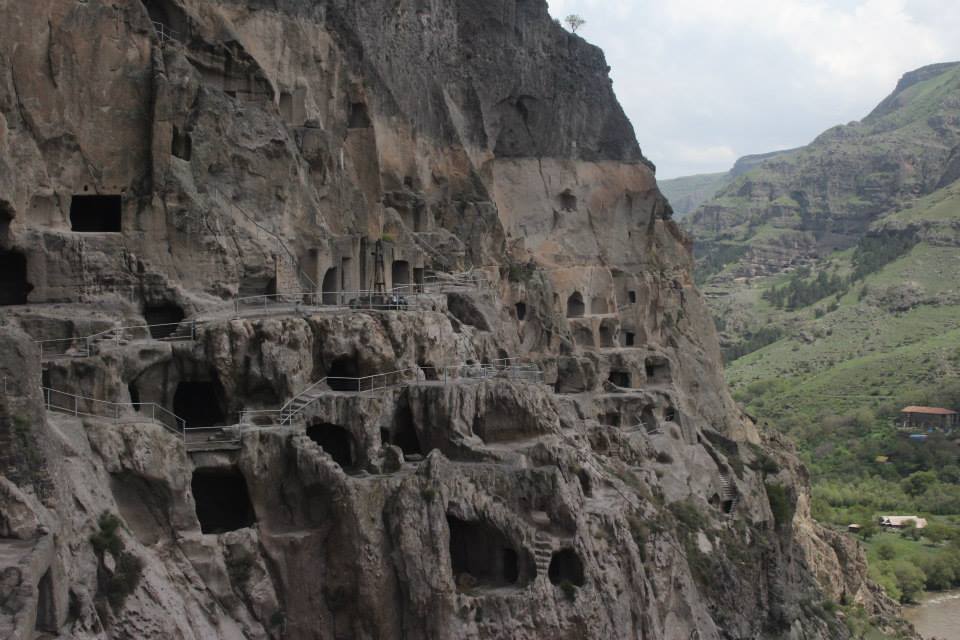 7. My lovely friends are very supportive. In Vardzia, famous ancient cave town, was terrible hot day. We were exploring caves and I was spending time kicking my head to the ceilings. My friends were keeping my mood positive by making many jokes of me and laughing their asses off. They knew, “I am sooo smart” and they never had doubts about it. 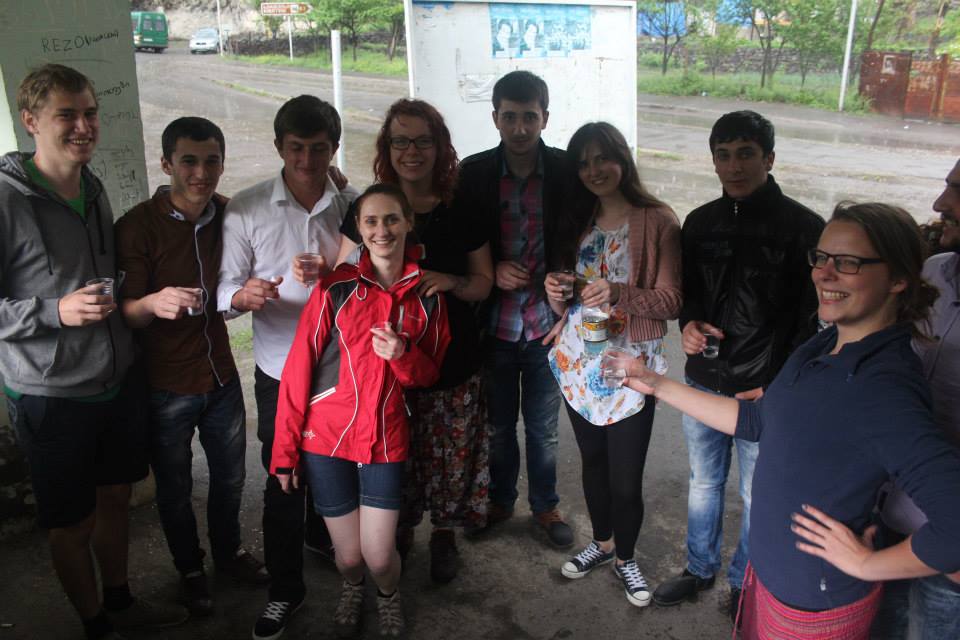 8. “The Dream Team” knows how to spend time during the rain. We got stuck in Khertvisi. We were hiding in bus stop from the biggest rain we have seen in Georgia. What to do, if it’s nothing possible to do? Drink. In front of us, was small store, where we bought some chacha. To keep ourselves warm. Suddenly,  bus stopped full of young Georgian students. After few minutes they come to us with bread, other food and alcohol. Georgian hospitality! We had few toast together and when they left. It happened so unexpectedly! 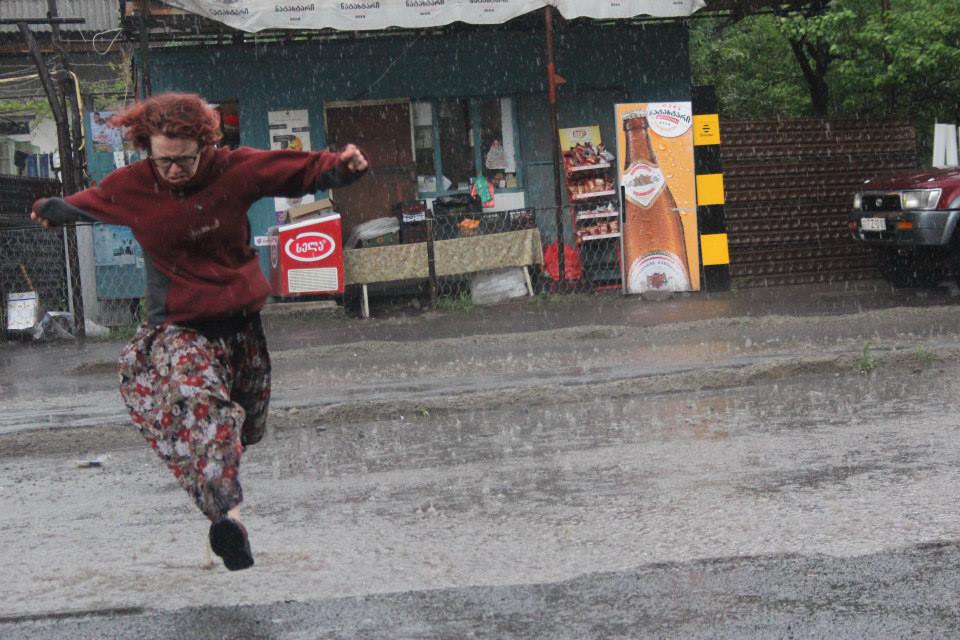 9. We know how to find strange places to stay. Me and my polish sister reached Ninotsminda and we were dying to find … toilet. While we were just trying to find out where we are in the town exactly, police car stopped and asked if we need any help. Yes.Toilet. We jumped to the police car and they drove us to our destination. After they found for us the cheapest place to stay. It was this kind of place where builders are living. No hot water, no normal toilet, no normal kitchen… but just 5 lari. We needed just a place to crash, so it worked for us. Ninotsminda is more Armenia, than Georgia. Even our host was Armenian… 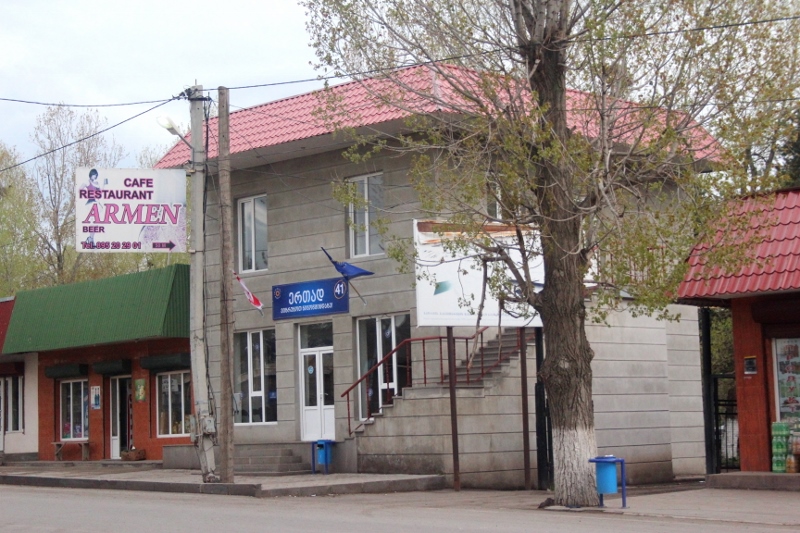 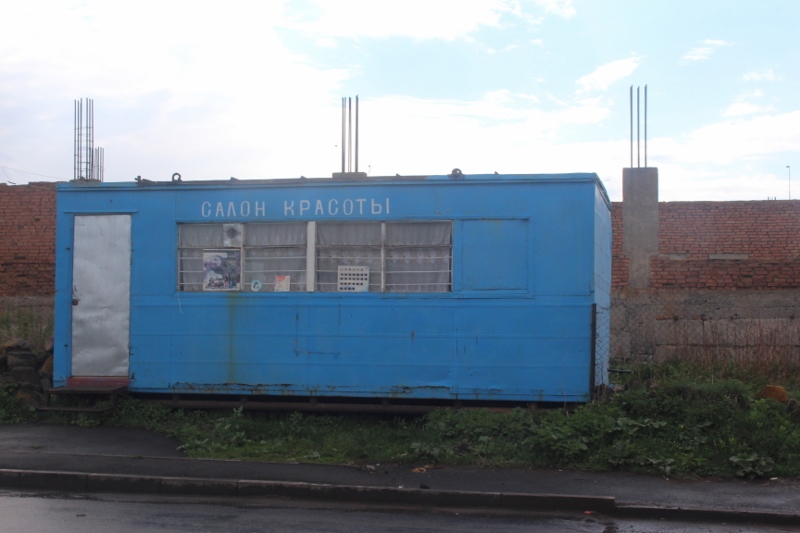 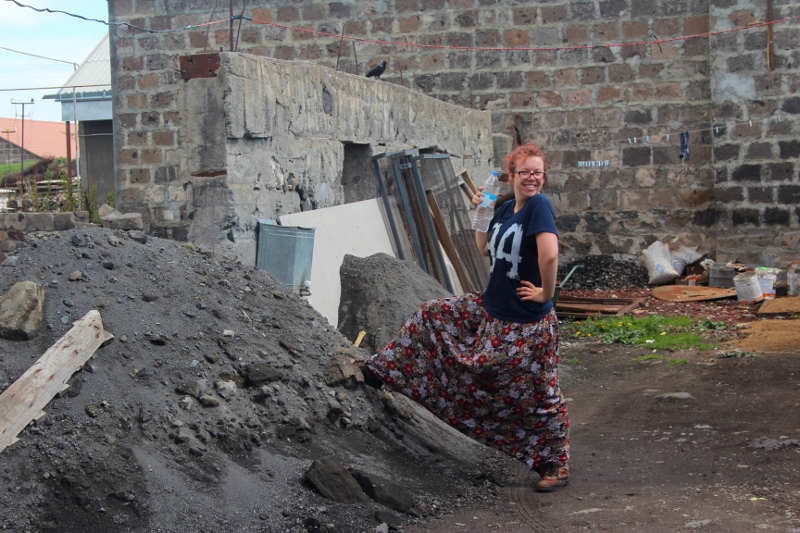 I know, after reading, it seems that “The Dream Team” was not normal, crazy and really was having problems with alcohol. I can just tell…It’s true. That’s why I loved them! 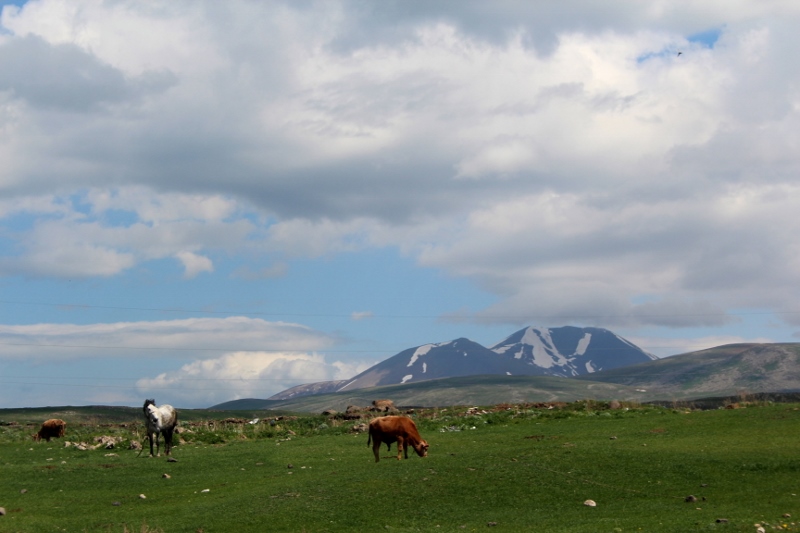